Posted on November 1, 2014 by Charles Scurlock

This post is an excerpt from my upcoming book, “Imagine Darkness, the making of the simple universe.” in part reiterating the points made in an earlier post, titled “Dark What” (June 2012). It is updated with new information and support from some new findings by astronomers. Thanks for reading it. I would welcome your thoughts and comments.

In early 2007, the journal Nature published the results of a study by a team of astronomers led by Richard Massey of Caltech, detailing their efforts at mapping the extent and nature of “dark matter”, that mysterious and as yet invisible substance that is presumed to make up the greater part of the physical mass of the universe. The university released its own notification of the publication, a portion of that press release is shown below.

SEATTLE—An international team of astronomers has created a comprehensive three-dimensional map that offers a first look at the weblike large-scale distribution of dark matter in the universe. Dark matter is an invisible form of matter that accounts for most of the universe’s mass, but that so far has eluded direct detection, or even a definitive explanation for its makeup. The map is being unveiled today at the 209th meeting of the American Astronomical Society, and the results are being published simultaneously online by the journal Nature. According to Richard Massey, an astronomer at the California Institute of Technology who led in the map’s creation, the map provides the best evidence yet that normal matter, largely in the form of galaxies, forms along the densest concentrations of dark matter. The map reveals a loose network of filaments that grew over time and which intersect in massive structures at the locations of clusters of galaxies. Massey calls dark matter “the scaffolding inside of which stars and galaxies have been assembled over billions of years.” Because the formation of the galaxies depicted stretches halfway to the beginning of the universe, the research also shows how dark matter has grown increasingly clumpy as it continues collapsing under gravity. The new maps of dark matter and galaxies will provide critical observational underpinnings to future theories for how structure formed in the evolving universe under the relentless pull of gravity. http://media.caltech.edu/press_releases/12939

The bolded text is a clue to the underlying assumptions held in general in the astronomy and physics communities in regard to the structure of the universe, that is, that it all arrived via a “big bang” and that the dark matter scaffolding existed at a time prior to the appearance of stars, galaxies, and clusters and, in fact, provided a major part of the basis for their development. In the tradition of modern physics, “dark matter” is assumed to be particulate, that is, of the same substantial nature as so-called ordinary matter, a term that covers all of the visible, to us humans, elements of the universe. So, is there another possible interpretation of this impressive body of data than that proposed by Massey and his colleagues? I am convinced that there is. In his paper, Gravitational Theory, Galaxy Rotational Curves, and Cosmology Without Dark Matter, for instance, the physicist John W. Moffat also clearly asserts, “The gravitational lensing of clusters of galaxies can be explained without exotic dark matter.”

In the non-particulate universe of my own and others’ concepts, “dark matter” is not “particulate,” not at all mysterious, and may have little or nothing to do with expansion. It is more likely to have arisen along with the development of the large energy-dense masses of stars, galaxies, and clusters than to have been around first, to serve as “scaffolding.” Dark matter is more likely to be a manifestation of the natural distortions of the field that we see around the presence of magnets or powerful electric currents right here on earth in our local environment, less a “chicken or egg” manifestation than a more or less “chicken and egg” event. To explain this further, I have borrowed some of Massey’s exhibits as follows:

The image below is a “dark matter” contour map of a segment of a Hubble image. According to Richard Massey, the colored points in the image are ordinary matter, i.e. stars, galaxies and clusters in the Hubble image. The contours then show the gravitational lensing intensity surrounding each of them, Massey calls these areas “dark matter,” scaffolding within which new star formation is encouraged or supported. My alternative construction of this data is that the ordinary matter consists of high energy concentrations in the electromagnetic ether, concentrations we identify as stars, galaxies, and clusters, and what the contours actually indicate are the intensity of field distortions these create in their vicinity, the otherwise invisible energy distortions that, it is true, do encourage the formation of what we will ultimately see as new stars, galaxies and clusters out of the energy of the field. 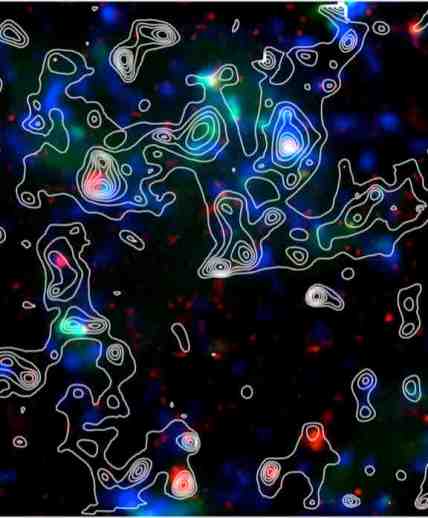 Figure 3.1 Massey’s “dark matter” contour map. The various colors show different types of ordinary matter but all their structure is built within the much more massive scaffolding of dark matter. (Massey: Nature)

In the computer simulation, below, one can visualize the location of field distortions surrounding the high energy concentrations we perceive as stars, galaxies and clusters. The apparent hard lines of the cloudlike forms are merely a representation of a selected threshold of perception. In actuality (if I may use that term) the intensity or energy level of these distortions probably follows a smooth curve, as other fields exhibit, i.e. falling off in intensity as the cube of the distance from the core. One can generalize from this conceptualization that we here in our galaxy, in fact, undoubtedly inhabit just such a region of “dark matter”, but we cannot detect it as Massey has been able to do by using Hubble images of regions at a distance from us. We can also see these regions as analogous to what we do perceive locally as magnetic, electric, and electromagnetic fields, which we also know are not particulate. This can also be seen as an explanation for the apparent “curvature of space” envisioned by Einstein. Light, itself, seen now as a visible range of frequencies carried on the background frequency of the electromagnetic ether, not through the vacuum of space, would naturally have its path distorted in traversing these regions, thus explaining Eddington’s 1919 observation of the curvature of light predicted by, and seen then as confirming Einstein’s relativistic model.

Massey w:light beamsFigure 3.2 Computer simulation, “dark matter scaffolding” by Massey. This image, created by Richard Massey through his analysis of Hubble images, gives us an idea of how the “dark matter” surrounding the high energy phenomena in the universe might be seen if it were visible. The bright elements within these magnetic fields are not from the original images but were added to show how the structures might be organized. For example, our galaxy might be one of those bright dots. The yellow line represents an undeflected path of light, the orange one how a light beam is likely deflected by the higher intensity of the distorted field. (Lines added by cs)

In a universe that is entirely made up of a wide range of distortions of the background field, (not of little billiard balls of “particles”), these so-called regions of “dark matter” do not consist of anything like a particulate ether forcing expansion of the universe as proposed by some authorities, but are simply distortions of the field arising from the presence of the high energy distortions they surround. Ernst Mach predicted this phenomenon when he stated, “… the ether not only conditions the behavior of inert masses but is also conditioned in its state by them.”

So here is the truth of the mysteries of “dark energy” and “dark matter.” All of everything is made up of energy, in various states depending on how and in what region of the universe it arose. That field, which we have chosen to call the ether, is all there is of what the mystery lovers among us choose to call dark energy. It is a field that while internally turbulent is fixed in its location. It is not going anywhere. Those regions of that field that have undergone distortion, increases in energy density where they surround and permeate those high energy, perceptible entities that have, up until now, been identified as objects, with a property called “mass,” is what those same experts have called dark matter. Our portion of the universe, our star, our galaxy, have taken part in this process. The energy concentration we call the milky way has generated a region of distortion of the field, a region characterized by a higher energy density, a region of dark matter so to speak. We live in that region. It surrounds and permeates us and affects the way our stars and planets behave, as we affect it, as Mach pointed out so many years ago.

Powerful evidence of these assertions have appeared in two studies in recent years. British researchers, M. Lockwood, R. Stamper, and M.N. Wild published in NATURE (Vol. 399, 3 June 1999. Pages 437-439), a paper entitled A Doubling of the Sun’s Coronal Magnetic Field during the Last 100 Years. They point to a doubling of the intensity of the sun’s field in that period. The reason for this occurrence is obvious in the model of the simple universe. Our entire solar system has moved into a region of increased energy density, that is, we have moved closer to the center of a system surrounding a high energy concentration in the field. One can picture this clearly if one imagines the orbits of our little group of planets around the sun. If the sun were fixed in position relative to the ether, or one fixed reference frame. then the planetary orbits would describe a series of concentric ellipses. But the sun itself is in motion, and into a region of higher energy density. One has then to imagine the orbits of our system as describing helices as the center of their rotation itself moves laterally relative to the ether and relative to other systems also in motion. (See Jamal Shrair, http://www.helical-universe.info) The fact remains, our solar system has moved in the last 100 years deeper into a region of higher energy density and the result is that our sun’s magnetic field has doubled in strength.

So here arises the need for a new vision of the precise notion of gravity, if “dark matter” is not actually subject to its “relentless pull”, but is a totally different kind of manifestation of the structure of the field; and a new look at expansion, assuming it really exists, as probably the creation of new concentrations (stars, galaxies, clusters) arising with help from the universe’s absorption of energy from the surrounding (and permeating) field of the cosmos.

Charles is a recently retired architect/planner and generalist problem-solver with a lifelong interest in science, physics, and cosmology, and the workings of the human mind. He has started this blog in the interest of sharing his ideas with others of like-(or not so like) minds.
View all posts by Charles Scurlock →
This entry was posted in 6 General. Bookmark the permalink.

This site uses Akismet to reduce spam. Learn how your comment data is processed.