“Everything is made of fields” (but fields of what?)

Sean Carroll of Caltech is right.

Well, partially right at least. In his lecture at Fermilab in 2013 (Particles, Fields and The Future of Physics) as reported in symmetry magazine that same year, (Everything is Made of Fields, July 18, 2013), he makes some important assertions.

(Dr. Carroll is Professor of Theoretical Physics and Astrophysics at California Institute of Technology)

From the symmetry article:

“To understand what is going on, you actually need to give up a little bit on the notion of particles,” Carroll said in the June lecture.

You’re already familiar with some fields. When you hold two magnets close together, you can feel their attraction or repulsion before they even touch—an interaction between two magnetic fields. Likewise, you know that when you jump in the air, you’re going to come back down. That’s because you live in Earth’s gravitational field.

Carroll’s stunner, at least to many non-scientists, is this: Every particle is actually a field. The universe is full of fields, and what we think of as particles are just excitations of those fields, like waves in an ocean. An electron, for example, is just an excitation of an electron field.

This may seem counterintuitive, but seeing the world in terms of fields actually helps make sense of some otherwise confusing facts of particle physics.

In his lecture Carroll explains this model very clearly in terms of quantum field theory, a major premise of which is that every charged particle carries with it a unique field and that the effects of these in motion and in collisions is the result of the interaction of those unique fields. The place where Carroll is right is in his explanation that what we, and most physicists call particles are, in fact, simply concentrations of the energy of those fields. So let that sink in a little. According to the standard model there exist in this world at least 60 different charged particles, count ’em. And each is carrying its own field around with it. That makes a pretty complicated picture, doesn’t it? And they are all out interacting with each other both inside and outside of their atoms and molecules. It makes the idea that we can understand their workings pretty impossible, it’s no wonder that quantum physicists gave up and decided that we can’t possibly measure them with any accuracy and invented a new form of probability theory to take the place of explanations.

The complexity grows. The article goes on to say:

“There’s an analogy that’s often used here,” Carroll said, “that doing particle physics is like smashing two watches together and trying to figure out how watches work by watching all the pieces fall apart.

“This analogy is terrible for many reasons,” he said. “The primary one is that what’s coming out when you smash particles together is not what was inside the original particles. … [Instead,] it’s like you smash two Timex watches together and a Rolex pops out.”

What’s really happening in LHC collisions is that especially excited excitations of a field—the energetic protons—are vibrating together and transferring their energy to adjacent fields, forming new excitations that we see as new particles—such as Higgs bosons.

Thinking in fields can also better explain how the Higgs works. Higgs bosons themselves do not give other particles mass by, say, sticking to them in clumps. Instead, the Higgs field interacts with other fields, giving them—and, by extension, their particles—mass.

As shown in this image from his lecture, the Higgs field is on its own, hovering somewhere above the other multiple fields dancing below, a not very convincing image, and what is it made of? Waves are waves of something and so are fields. 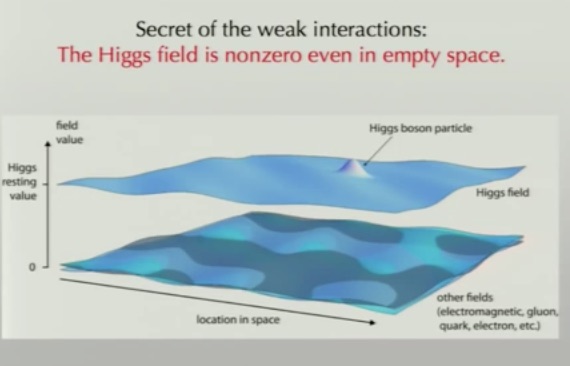 Mass equals energy, doesn’t it? So why don’t we just say that instead of introducing another term for energy that isn’t needed? We’ll never know.

Back to where Dr. Carroll is less right. There is a simple way to cut through all of this complexity. Just as he has eliminated a complex variable by making particles into what they most likely really are, a version of Einstein’s notion that they might just be “condensations of the ether,” what if we eliminate all of those multitudinous fields and say there is only one? Then we could give up having to explain how each of over 60, and who knows how many more, unique fields arose (a chicken and egg quandary, as well, in the sense of which comes first, the field or the particle, and, by the way, from whence did either arise?), we can see these multiple entities as simply arising from the energy of a single, primal field, giving us only one mysterious entity to seek the origins of. The obvious description of it is that it is an electromagnetic field, high frequency, high energy because there is so much of it, fixed in location, extending indefinitely in all directions, but internally turbulent. And because of its nature and structure it establishes a key limit, “c,” the velocity of light and all other EM radiation. No photons needed, light is simply a coherent distortion of the field itself, just as sound is just a distortion of its own medium.

In my own writings, I have dubbed this model the simple universe, for obvious reasons. In the simple universe we don’t talk of matter or mass, we call it what it is, energy and energy density. And instead of those 60 plus fields chasing each particle around, what QFT calls unique fields, they are seen as simply distortions of the primal field, surrounding the high concentrations of energy manifested as “particles,” on up to stars, galaxies, and clusters. And guess how those distortions manifest themselves to us and our astronomers. Why, they are the regions the mystical physicists call “dark matter,” distortions of that primal field which itself is actually, you guessed it, “dark energy.”

No particles were destroyed in this experiment, they just didn’t exist in the first place.

Charles is a recently retired architect/planner and generalist problem-solver with a lifelong interest in science, physics, and cosmology, and the workings of the human mind. He has started this blog in the interest of sharing his ideas with others of like-(or not so like) minds.
View all posts by Charles Scurlock →
This entry was posted in 6 General. Bookmark the permalink.

6 Responses to “Everything is made of fields” (but fields of what?)

This site uses Akismet to reduce spam. Learn how your comment data is processed.